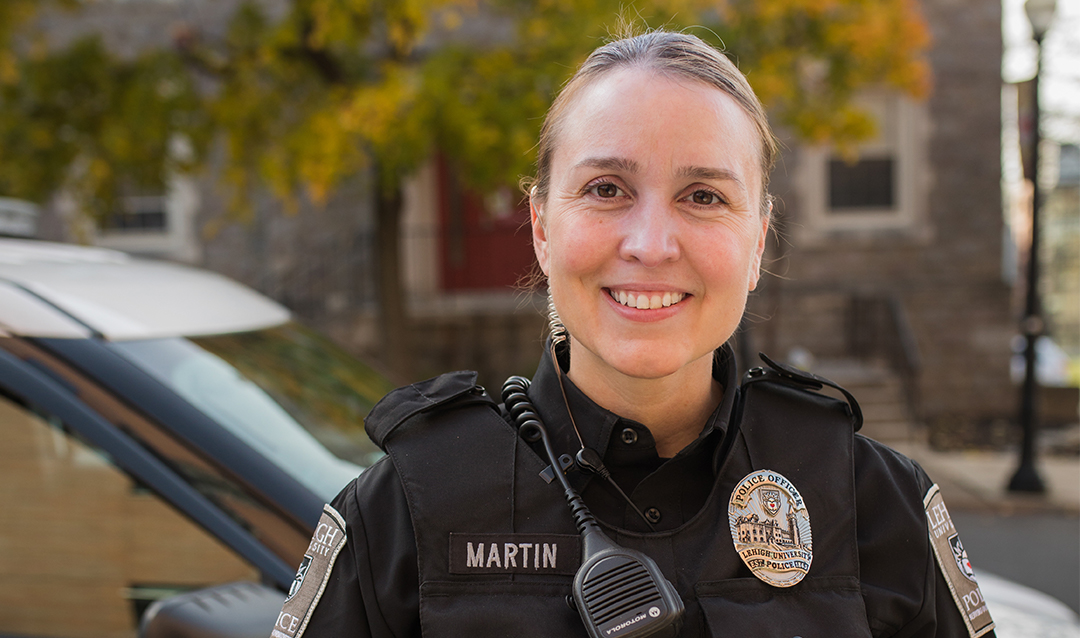 Lehigh University Police Officer Lora Martin talks proudly of her Portuguese, Slovakian and Hungarian heritage and her upbringing by industrious parents, who had instilled in her the value of hard work. Her grandfather, father and two uncles worked for decades at Bethlehem Steel, not far from Lehigh University. Her grandmother, mother and an aunt worked in sewing factories, also in South Side Bethlehem.

Her parents had each left school by ninth grade to work and help support their families.

The youngest of four children, Martin says she struggled in school in her early years because of problems with reading comprehension. And, because of several family moves, she attended five elementary schools, two middle schools and one high school, which also affected her education.

“I was so behind in my education and I never gave up,” she says. “I learned at the end I'm not alone, and there are so many more resources for students out there today. I can have more time on my tests, but I decline. I sometimes think my parents raised me [to be] too strong.”

Martin adds, “I honestly believed college wasn’t in the cards for me.” But a few years out of high school, she enrolled at Northampton Community College (NCC) on a part-time basis while working full-time, earning an associate’s degree in criminal justice.

She remembers “walking into an unfamiliar environment without a road map or breadcrumbs to follow. You're creating this new path for yourself, all on your own, without any guidance.”

As she reflected on being a #firstgen student, she says, “The hardest part was figuring everything out on my own and not being sure if I was on the right path. It just felt like everything took a little longer for me to comprehend.”

Martin says she can imagine how wonderful it must be if parents are able to share memories of their first time on a college campus with their sons or daughters—”something I wish I had. I didn’t know there were all these perks on a college campus. I was just happy enough sitting in the classroom for the first time.

“Someone once said to me, ‘Stop feeling sorry for yourself.’ And he was right. It’s not about what you don’t have, it’s about what you do have. I have broken not just barriers, but the cycle.”

After NCC, Martin went on to the Police Academy at Montgomery County Community College to train to be an officer, also while working full-time. She was then offered a job at Lehigh University, where she has distinguished herself. In 2020, she received the John W. and Barbara R. Woltjen Award for her commitment to Lehigh and her exceptional service to the campus community. She also received Lehigh’s Tradition of Excellence Award in 2019 and a Keys to Our Success Award in 2017-2018. She has taught many self-defense and crime prevention courses to Lehigh students, staff and faculty.

Martin is pursuing her bachelor’s degree in criminal justice at DeSales University, with graduation expected in 2021.

“My college degree doesn’t just symbolize my accomplishment,” she says, “but also my family’s. I am blessed.”